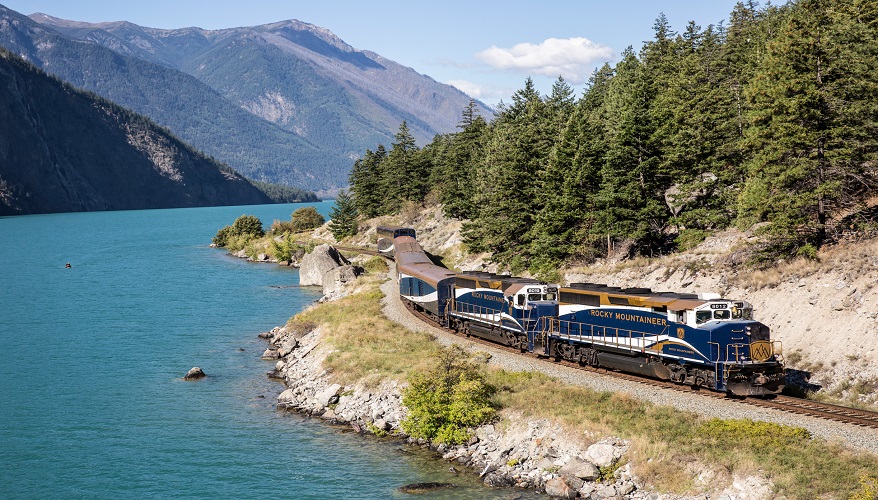 This rail journey invites you to travel in luxury from Toronto’s urban excitement, through a spellbinding diversity of landscapes to Vancouver, a metropolitan gem on the Pacific coast. Explore cosmopolitan Toronto before boarding VIA Rail’s famous "Canadian" travelling west through the lake regions of Manitoba and the grain fields of Saskatchewan. Once in Alberta, you will embark on a tour of the Canadian Rockies, culminating in a visit to the Columbia Icefield. Your journey continues as you board the Rocky Mountaineer and enjoy daylight train travel through some of the most spectacular areas in Western Canada en route to Vancouver. A sightseeing tour of Vancouver, as well as day trips to Niagara Falls and Victoria are sure to enhance your experience.

Arrive at Toronto’s International Airport and transfer independently to your downtown hotel. Pick up your information kit at the front desk upon check-in. The remainder of the day is at leisure to explore Canada’s commercial and cultural centre. Overnight in Toronto.

Enjoy a full-day excursion to Niagara Falls. The route travels through the lush fruitgrowing district of the Niagara Peninsula to the spectacle of Niagara Falls. Board the Hornblower Niagara Cruises Voyage To The Falls boat tour for a spectacular boat trip to the foot of the Horseshoe Falls. Ample time will be spent at the falls to give you every opportunity to take pictures and admire the thundering waters. Highlights include a lunch and a trip along the beautiful Niagara Parkway which winds its way along the Niagara Gorge. Pass through the historic community of Niagara-on-the-Lake before returning to Toronto. Overnight in Toronto.

Toronto - VIA Rail (The Canadian)

VIA Rail (The Canadian)

Travelling north of the Great Lakes, view the rugged terrain of the Canadian Shield, some of North America’s oldest rock formations. Rich in minerals and forests, the region is dotted with thousands of freshwater lakes. By early evening, the train crosses the border into the province of Manitoba and stops briefly in its capital, Winnipeg. Overnights on board VIA Rail’s The Canadian.

By early morning, you will have crossed the vast expanses of prairie flatland in Saskatchewan and Alberta, and will be approaching the imposing silhouette of the Rocky Mountains. Enjoy the spectacle of nature as the train enters Jasper National Park. Overnight in Jasper

You have a full day to relax and tour Jasper and the surrounding area. Enjoy a ride on the Jasper Tramway or visit Miette Hot Springs. Take in the breathtaking panorama of Jasper National Park’s serene lakes and gentle meadows standing in stark contrast to its jagged peaks and spectacular glaciers. Overnight in Jasper.

Today will be an unforgettable journey as you depart Jasper on your transfer along the Icefields Parkway, one of the most scenic roads in all of Canada. Every turn unveils spectacular vistas of magnificent peaks, outstretched valleys, cascading waterfalls and mountain meadows alive with colour. At the Columbia Icefield, ride in an Ice Explorer to explore the Athabasca Glacier (ride included). Continuing just beyond the edge of the glacial shelf, you arrive at Lake Louise – a verdant shimmering lake reflecting the majesty of the Victoria Glacier. Overnight in Lake Louise

Take some time in the morning to explore the village of Lake Louise - a picturesque gateway to the mountain areas of Banff National Park, its small train station made famous in the film Dr. Zhivago. Today you will be transferred through the winding roads of Banff National Park to arrive at the Banff town site. Wildlife meander through the green spaces creating truly unique photo opportunities. Boutiques, confectioners and eateries line the quaint boulevards, adding to the charm of this picturesque alpine town. Overnight in Banff.

This morning, discover the town of Banff and its natural surroundings on a comprehensive sightseeing tour. The tour will show you some of Banff National Park’s many highlights, including the Hoodoos, curiously shaped by centuries of erosion, Surprise Corner and Tunnel Mountain Drive, overlooking the beautiful scenery of the Bow River Valley. The remainder of the day is at leisure. Overnight in Banff.

Today you board the Rocky Mountaineer heading west to the Pacific Coast. This unique daylight service allows you to view some of the most spectacular sights in western Canada. The route departs the Rockies through Kicking Horse Pass, then climbs into the Selkirk Mountains following Rogers Pass. By late afternoon, you are in the arid ranchland of interior British Columbia, where you disembark for the night. Overnight in Kamloops.

Today your spectacular daylight rail excursion to Vancouver continues. The journey leads through the "cowboy country" ranchland of the British Columbia interior and along the mighty Thompson and Fraser rivers. Rugged mountain peaks and rolling, wind-swept hills will define the horizon as you traverse the interior and approach the Coastal Mountains surrounding Vancouver. Upon arrival in Vancouver, transfer independently to your hotel. Overnight in Vancouver.

Discover Vancouver on a hop-on hop-off tour, taking in the sights of historic Gastown, English Bay, Granville Island, the colourful totem poles of scenic Stanley Park and much more. Overnight in Vancouver.

This full-day trip to Victoria begins with a cruise through the scenic Gulf Islands and includes a visit to the acclaimed Butchart Gardens. Afterwards continue to Victoria for a city sightseeing tour that encompasses Victoria’s stately homes and gardens as well as historic landmarks. You will see the University of Victoria and Beacon Hill Park and pass the Royal British Columbia Museum, Thunderbird Park, the Parliament Buildings and the exclusive homes of the Uplands and Oak Bay. You will return to Vancouver in the early evening. Overnight in Vancouver.

Individually transfer to Vancouver International Airport in time to check in for your return flight.

Various departure dates through May, August & September 2021 - call us for an up-to-date list.

Please call us on (01892) 779900 or email This email address is being protected from spambots. You need JavaScript enabled to view it. stating your preferred travel dates, and number of passengers for a detailed & competitively priced quotation.