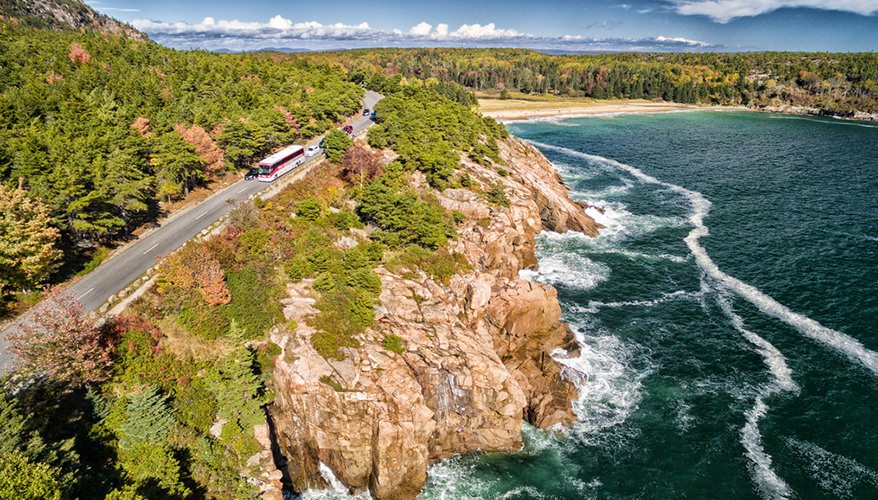 The six states of New England are some of the nation's most historic and undeniably beautiful. Here you can enjoy a friendly and relaxed pace of life whilst discovering quintessential New England villages and small towns, with picturesque village greens, covered bridges, lighthouses and fishing harbours. Enjoy distinctive New England food, such as clam chowder and lobster, especially along the coastline where you will also find artists' colonies with galleries and museums.

From the glorious ocean beaches of Cape Cod, the stunning White Mountains of New Hampshire and Vermont's Green Mountain National Forest, to the rolling Berkshire Hills and Connecticut countryside there really is no shortage of stunning vistas and photograph opportunities in this beautiful part of the states.

Whilst the whole region has become famous as one of the best places in the world to view the magnificent display of changing fall colours, the entire north-eastern USA is a great holiday choice year round. The winter months bring wonderful opportunities for skiing and skating and then as the days lengthen in spring the landscape instead offers ideal weather for hiking and biking and also opportunities to go whale watching. Finally, the long summer days are perfect for all kinds of vacation and beach activity, with swimming and boating along the seashore and on freshwater lakes. Summer also brings a cultural feast with one festival after another throughout the different states.

Massachusetts is arguably the state that most people first associate with New England. The state has many highlights, including the city of Boston. See the city from a local's perspective by catching a Red Sox game. Eat cannoli in the old Italian neighbourhood of North End.

This state is home to some beautiful natural landscapes. The White Mountains are the location for 48 of the state's peaks in excess of 4,000ft and the highest mountain in the North East - Mt. Washington. The Lakes Region; Winnipesaukee, Squam, Winnisquam, Waukewan and Wicwas Lakes offer beautiful landscapes and breathtaking scenery.

Maine is the largest state of New England, bigger than the other five states combined and is home to the Acadia National Park; a beautiful landscape where you can watch the sun rise before anybody else in the USA.

Featured in our Freedom Trail and Maine Coast Explorer Itineraries.

In Woodstock, Vermont, visit the Marsh Billings Rockefeller National Historic Park - the USA's smallest National Park. In Burlington, cycle or walk the path once the Central Vermont Railway, crossing beaches and parks with views of Lake Champlain and the Adirondack Mountains.

Newport is the main city area of Rhode Island; enjoy spectacular, wide open ocean views and marvel at the multi-million dollar mansions dotted along '10 Mile' or Ocean Drive. Bristol is a quaint and historic town and is often regarded as one of Rhode Island's best kept secrets.

No visit to Connecticut would be complete without a visit to Mystic Seaport and Aquarium. The Thimble Islands are an archipelago of several small islands in Long Island Sound in and around the harbour of Stony Creek.

There is far more to the state of New York than the city it is best known for; step just outside the boundaries of the Big Apple and you will be greeted by some of the most stunning scenery the country has to offer as well as some of the best vineyards and craft breweries. Much history is also contained here, including the Museum and Presidential Library of Franklin D. Roosevelt and the home of Kodak founder, George Eastman, which is now a major film archive and museum of photography.

The city of Washington, in the District of Columbia, and the four surrounding states of Virginia, West Virginia, Maryland, and Delaware are collectively known as the Capital Region. Since the days of the first American colonies, US history has been shaped here, from the Jamestown landings to the battles of the Revolutionary and Civil wars to more recent civil rights milestones.

Featured in our Cruisin' the Capital Region and Heritage Highways Itineraries.