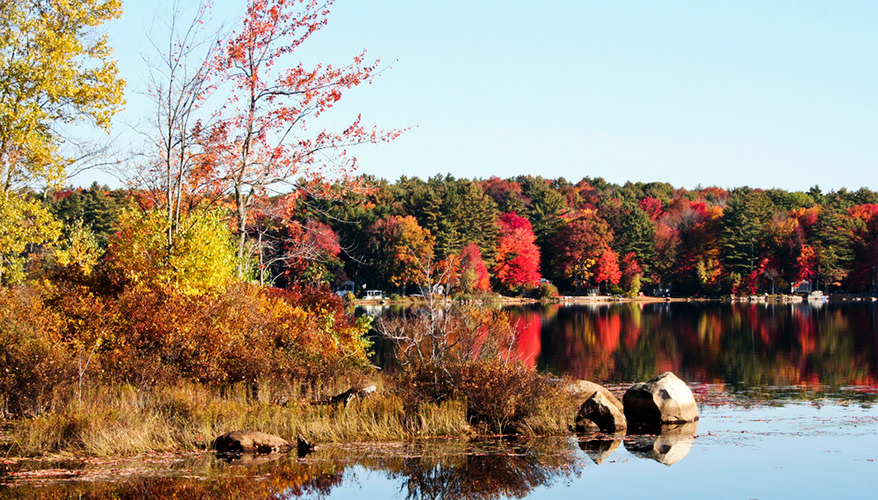 Your tour starts in Boston, the birthplace of American independence and a quintessential historic city with narrow streets and winding lanes, before taking you through the delightful Lakes region of New Hampshire and The Berkshires. You’ll also discover the dramatic contrast between the coastline and the stunning White and Green Mountains. If you don’t have time to travel in fall when the foliage is ablaze, this tour is very much for all seasons. The Lakes and Mountains of New England are also a great place to visit in the summer, whilst Spring spouts a bevy of blooming flowers and budding trees.

Boston is the very seat of American history. Only Virginia is older than the Massachusetts Colony. The first Thanksgiving was celebrated at Plymouth Rock. The first calls for independence rang out from Boston and the first shots of the American Revolution were fired at Lexington and Concord. The two and one half miles of the Freedom Trail in downtown Boston are likely the most historic blocks in the United States.

You can see the Old North Church, Paul Revere’s home and Faneuil Hall, the revolutionaries meeting place that is now filled with restaurants and shops. Walk the trail to get the best perspective of this important piece of Americania. The list of other most visited places in Boston includes the Boston Common, a public meeting place since 1630, the Boston Museum of Science, Cheers, of television fame, and the Boston Museum of Arts with its world-renowned collection of 450,000 items. The New England Aquarium offers special whale watching trips until October. Also consider visiting the John F. Kennedy Presidential Library or take the City View Trolley Tour to get an overview of all the historic parts of the city.

Situated in Central New Hampshire, lies beautiful Lake Winnipesaukee, which forms the centre of the vacation orientated Lakes Region. With a 300 mile shoreline, Lake Winnipesaukee offers several nice places to stay – one of the most sophisticated of which is Meredith. Enjoy this afternoon and tomorrow walking or boating or simply relaxing on the shore of this beautiful lake.

Likely the White Mountains will be what you expended in quintessential New England. Cold clear rushing streams reflect the bright green of summer or the blazing colors of the fall that set the hillsides on fire. Towering granite cliffs and soaring mountains often hug both sides of the road. Over the next few days discover the history of the White Mountain Trail and beauty of the Kancamagus Highway National Scenic Byway and of course, plan to travel to the summit of Mt. Washington, whether by car, cog railway or guided tour. Many charming villages along the way still look as they did when writer Nathaniel Hawthorne and painter Thomas Cole lived here in the 18th century. The pace of life in many places hasn’t changed much either.

The lush foliage, white steepled churches, winding roads, and quaint New England towns of the Green Mountains can feel as old as time Much of the countryside hasn’t changed a great deal since the Green Mountain Boys declared Vermont its own country 230 years ago. Nearly 75 years have passed since the von Trapp family settled in Stowe. The “hills are still alive with the sound of music.” Mountains here have interesting names like Camels Hump and Crouching Lion. Divided sharply into east and west sections by the lofty hills, early settlers chose their representatives to balance the government from both sides, a phenomenon now known as “mountain rule.” New England independence at its finest!

Despite being Vermont's largest and perhaps most cosmopolitan city, Burlington still offers visitors a perfect blend of old New England charm, arts, culture and nature. Idylically located on the shores of Lake Champlain, between the Adirondack and Green Mountains, Burlington is one of those places you can't help but fall in love with. During the summer, it’s streets come alive with festivals and outdoor concerts whilst popular Leddy Park offers plenty of opportunities to swim, fish or simply relax on the beach. Meantime, Church Street Marketplace, with its early 1900s architecture, great restaurants, live entertainment, one-of-a-kind shops and well-known stores, is the focal point of the downtown area.

Manchester Village and Manchester Center, less than 2 miles apart are strikingly different. One is all about mansions and being an art center whilst the other is famed for its great outlet shopping.

Further south in the Berkshires, we expect that you’ll find Mount Greylock one of the highlights of the region. At 3,491 feet in elevation, it is the highest point in Massachusetts and southern New England, offering fantastic panoramic views into five states. It is also one of the most scenic mountains in the Eastern United States. It is so inspirational legend has it, that Greylock's long, saddle-like shape inspired Herman Melville to write "Moby Dick". He was, by all accounts, enamored with the mountain, and he even set up a special observation deck at his home (near Pittsfield) so he could view Greylock whenever he desired. After you savor the views from the mountain, savor the art at the new Massachusetts Museum of Modern Art in North Adams. Visit Williamstown, a beautiful New England college town with tree-lines streets, classic architecture with an emphasis on white clapboard and black trim. The combination of old money and an academic environment has made Williamstown remarkable in its cultural resources. The Williamstown Theatre Festival takes place at the Williams College between late June and the end of August.During the 1880's Lenox was the site of much frenetic building as many of the famous families with homes here - the Vanderbilts, Harrimans and Biddles - battled to out do one another by building ever more magnificent 'cottages', By the turn of the century the hills around Lenox and Stockbridge were dotted with some 75 villas and mansions with manicured lawns and formal gardens. Some still remain open to the public today.

Stockbridge, the most popular town in the Berkshires was once home to Norman Rockwell, one of America's greatest artists. The area has a small town feel and epitomizes the image of a New England town. As in Lenox, there are some historic homes open to the public here and there is also the Norman Rockwell Museum, who was one of the towns most famous residents, which houses many of his original works.

Enjoy another leisurely morning in the lovely Berkshires before heading back to Boston to fly home later today.