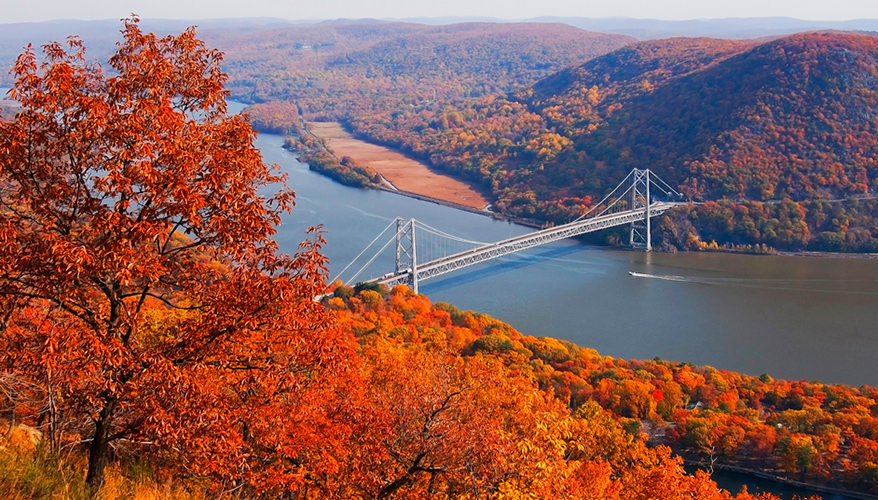 Your tour of some of North Eastern America’s most majestic scenery starts in Boston, the birthplace of American Independence, and a quintessential historic city with narrow streets and winding lanes. Discover the contrasts between New England’s stunning White and Green Mountains, before heading to New York State to see The Adirondack and Catskill Mountain ranges. Finally your journey will take you into Pennsylvania via the Pocono Mountains. If you don’t have time to travel in fall when the foliage is ablaze, this tour is very much for all seasons.

Boston is the very seat of American history. Only Virginia is older than the Massachusetts Colony. The first Thanksgiving was celebrated at Plymouth Rock. The first calls for independence rang out from Boston and the first shots of the American Revolution were fired at Lexington and Concord. The two and one half miles of the Freedom Trail in downtown Boston are likely the most historic blocks in the United States.

You can see the Old North Church, Paul Revere’s home and Faneuil Hall, the revolutionaries meeting place that is now filled with restaurants and shops. Walk the trail to get the best perspective of this important piece of Americania. The list of other most visited places in Boston includes the Boston Common, a public meeting place since 1630, the Boston Museum of Science, Cheers, of television fame, and the Boston Museum of Arts with its world-renowned collection of 450,000 items. The New England Aquarium offers special whale watching trips until October. Also consider visiting the John F. Kennedy Presidential Library or take the City View Trolley Tour to get an overview of all the historic parts of the city.

Likely the White Mountains will be what you expended in quintessential New England. Cold clear rushing streams reflect the bright green of summer or the blazing colors of the fall that set the hillsides on fire. Towering granite cliffs and soaring mountains often hug both sides of the road. Discover the history of the White Mountain Trail and beauty of the Kancamagus Highway National Scenic Byway and of course, plan to travel to the summit of Mt. Washington, whether by car, cog railway or guided tour. Many charming villages along the way still look as they did when writer Nathaniel Hawthorne and painter Thomas Cole lived here in the 18th century. The pace of life in many places hasn’t changed much either.

The lush foliage, white steepled churches, winding roads, and quaint New England towns of the Green Mountains can feel as old as time Much of the countryside hasn’t changed a great deal since the Green Mountain Boys declared Vermont its own country 230 years ago.

Nearly 75 years have passed since the von Trapp family settled in Stowe. The “hills are still alive with the sound of music.” Mountains here have interesting names like Camels Hump and Crouching Lion. Divided sharply into east and west sections by the lofty hills, early settlers chose their representatives to balance the government from both sides, a phenomenon now known as “mountain rule.” New England independence at its finest!

Covering an area larger than Connecticut and Rhode Island combined, The Adirondacks are said by locals to be named after an Iroquois insult for enemies they'd driven into the forests and left to become "bark eaters." Until recent decades the area was almost the exclusive preserve of loggers, fur trappers, and a few select New York millionaires. For sheer grandeur, the region is hard to beat: 46 peaks reach to over 4000ft; in summer the purple-green mountains span far into the distance in shaggy tiers, in fall the trees form a russet-red kaleidoscope. Pay a visit to the informative Adirondack Region tourist office for useful information about the area to make your stay here even more enjoyable.

Rising above the west bank of the Hudson River, the magnificent crests of the Catskills, cloaked with maple and beech that turn orange, ochre, and gold each fall, have a rich and absorbing beauty. This dislocated branch of the Appalachians is inspiring country, filled with amenities and things to do such as hiking, fishing, and, especially, skiing.

Known as North Eastern Pennsylvania’s favourite playground, The Pocono Mountain region also has a unique cultural heritage. In the Winter The Poconos are more famous for its resorts and great skiing. However, during the other seasons the region is known for its natural beauty and historical towns. Enjoy the blooming springtime laurel blossoms or explore the mountains on horseback or by bike in summer. Alternatively you can tee off at a golf course or sample a micro-brew at one of the local breweries.

Enjoy another leisurely morning in Pennsylvania or take advantage of some of the great outlet shopping before heading back to Newark, to fly home later today.