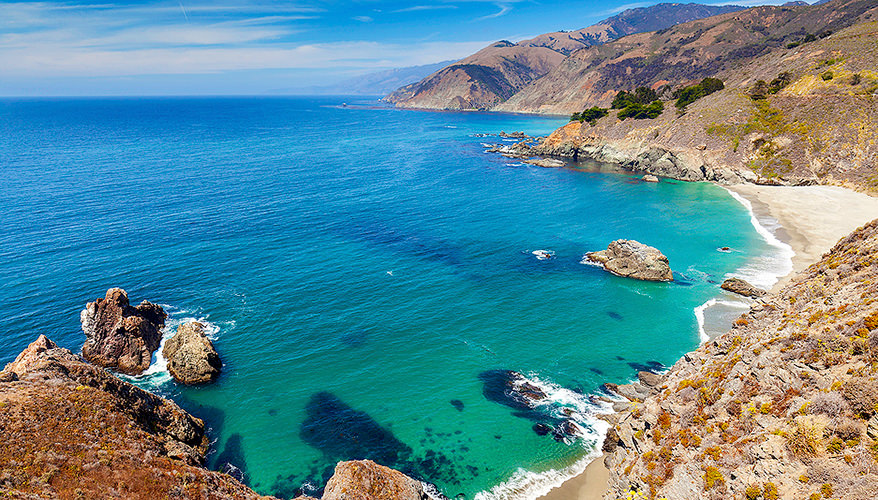 Want to explore Coastal California but don't want to drive? Then look no further as this exciting 10 Day Independent Rail Tour lets you see all the highlights of the Golden State and more without the driving.

An entire day to enjoy the many sights. Visit Fisherman's Wharf and enjoy local fare. Take a trip to Alcatraz Island; see the world famous sea lions at Pier 39, and the Aquarium. Perhaps take a cruise on San Francisco Bay with magnificent views of The Golden Gate Bridge. Spend time in Golden Gate Park and ride the famous cable cars.

Enjoy a sightseeing tour to Monterey and Carmel from San Francisco. This is a fully narrated 11-hour bus tour that shows California’s rugged Central Coast, a view that will both humble and inspire you. Starting the Monterey portion of the tour, you will travel south via Highway 1 through Santa Cruz offering a spectacular view of the
Central Coastal area. The tour includes scheduled stops at Steinbeck’s Cannery Row in Monterey - known for the charac-ters in John Steinbeck’s novel “Cannery Row.” Find seaside exploration, shopping and activities for everyone on Monterey’s beautiful shoreline. There are vista points along 17 Mile Drive including stores, art galleries and the restaurant district of Carmel that are perfect for lunch and shop-ping! You will visit the one-square mile city of Carmel, located on the Bay of Carmel above the white-sand beach which offers a picturesque and beautiful memory for
the last portion of your tour. The trip back to San Francisco will take you through theSilicon Valley in the San Jose and Santa Clara counties.

This morning join a half-day bus tour to John Muir Woods National Park, just 17 miles northwest of San Francisco across the Golden Gate Bridge. You’ll marvel at the size of the giant redwoods at John Muir Woods. And you will enjoy the bay views, shopping, art galleries and fabulous mansions in Sausalito, home to some of the country’s wealthiest citizens. This after noon is at leisure for personal sightseeing and shopping.

Los Angeles on the Coast Starlight

A long and exciting day as we join Amtrak’s “Coast Starlight” at Oakland Rail Station. From Oakland to Los Angeles, the tracks follow the same route as the old Spanish mission road, “El Camino Real.” From 1769 to 1823, Franciscan Friar Junipero Serra founded a chain of 21 missions and four mission chapels along this road from San
Diego to Sonoma. Each was built to be one day’s horseback journey from the next. Serra himself has become known as the “Apostle of California.” We travel through, San Jose, known as the capital of Silicon Valley for its location within the boom-ing technology industry. Then through the Santa Clara Valley, with the Santa Cruz mountain range on the right, and Mt. Hamilton (4,430 ft.) on the left as we leave San Jose. As we pass behind Pismo State Beach and Dunes, we get a glimpse of the massive sand dunes through tall Eucalyptus trees. We now get a full view of the Pacific Ocean and follow the coastline for the next 104 mi. to Ventura.

Our train passes the Santa Ynez Mountains on the left, and Santa Barbara, referred to as “The American Rivera” due to its Mediterranean-like climate, spectacular beaches, culinary delights and 130 nearby wineries. Turning east, we leave the coastal plain and climb the narrow Simi Valley. The Santa Susanna Mountains are on the right and the Simi Hills are on our left. Then comes the broad, flat San Fernando Valley between the Santa Monica Mountains and the San Gabriel Mountains and finally we enter the City of Los Angeles late this evening.

Get ready to be a part of Entertainment Capital of the world. There are few cities that offer as much entertainment, excite-ment and diversity as do the attractions in Los Angeles. A 5 hour tour includes many of Los Angeles most appealing sights, with visits to Hollywood Blvd, Mann Chinese Theater, Kodak Theatre, World Famous Farmers’ Market and The Grove, Sunset Strip, Rodeo Drive in Beverly Hills, Santa Monica Pier and 3rd Street Promenade.
The tour includes 5 stops at various points of interest, including the Hollywood Walk of Fame and is fully guided with sightsee-ing commentary - a fun and exciting way to get an overview of the city so that you
can decide later where you’d like to focus your time.

This afternoon take the Pacific Surfliner train for the short journey to Anaheim and a two night stay.

A magical day with a whole day ticket (Not Included) to fantastic Disneyland Park, known as the happiest place on earth. Fan-tasyland, Tomorrowland, Space Mountain, Adventureland and many other attractions await your enjoyment.

A short train ride takes you to San Diego this morning with the rest of the day to enjoy what San Diego has to offer. Perhaps visit Balboa Park, home of the San Diego Zoo, or visit SeaWorld to see Shamu.

Your rail adventure tour ends today as you take your flight home.