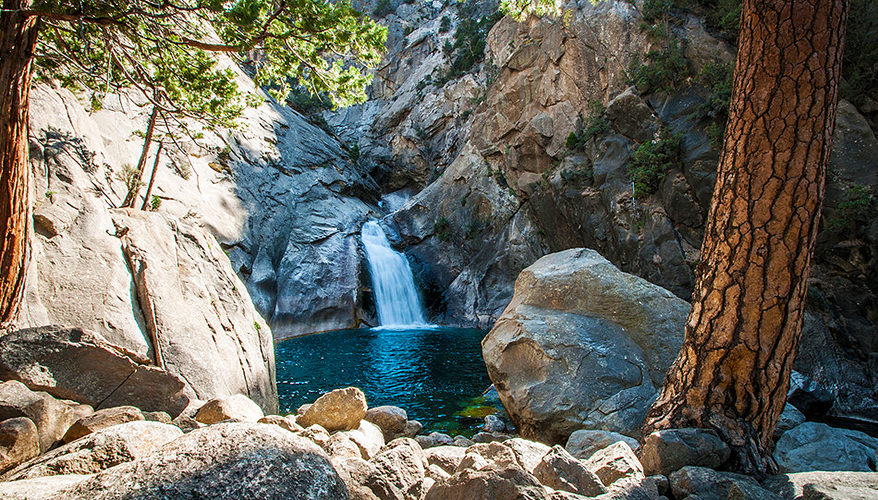 Views of southern California are often stereotypical. This one will change your mind. The immense and incredibly diverse lower half of California takes you from crashing waves and barking seals to high and dry desert, with towering redwoods, the lowest spot in North America, castles and ghost towns in between. In contrast to beaches and surfboards, southern California has Sequoia/King Canyon National Park, with the largest redwoods in North America, Death Valley and Joshua Tree National Parks and the Mojave Desert Preserve, teeming with desert life. Channel Islands National Park lies just off the lush Pacific Coast Highway. Each location presents a totally unique view of nature and together, form a microcosm of nature's finest.

Los Angeles is a city of suburbs that includes Hollywood, Beverly Hills, Santa Monica and Anaheim, stretching east into the California desert. Enjoy classic boardwalk fun on the historic Santa Monica Pier, visit "the Mouse" at Disneyland, window shop on Rodeo Drive, and take in any number of LA's fabulous museums and attractions. The view from the Getty Center, sitting high above the city, is as spectacular as the art collection inside. Driving in Los Angeles is a way of life and a great way to see the city. So roll down the windows and head out on one of the fabulous scenic drives around town. Cruise the Sunset Strip, check out the entertainment hot spots on Hollywood Boulevard, or journey through the city's historic, cultural and architectural roots along Wilshire Boulevard. On your second day, take the ferry to scenic and historic Santa Catalina Island, less than an hour but a world away from Los Angeles.

The Real California. That's what you'll find in the relaxed and eclectic town of Ventura, where artists of every description and executives with surfboards comingle in the "land of endless summers." From the historic buildings turned into upscale shops and restaurants in vintage Downtown and the thriving art scene in funky Westside to Oceanside's classic Southern California beach front, you'll experience the best of authentic California all in one place. Year-round temperatures here average 70 degrees, which attracts outdoor enthusiasts with surfboards, kayaks, bicycles and hiking boots in tow. Los Padres National Forest, the Channel Islands National Park and the National Seashore are all within reach.

Plan to visit the unique and fascinating Channel Islands National Park today by boat from Ventura. Each of the five islands is a complete world of its own, and offers visitors a glimpse of the original California. You can get your bearings at the Robert J. Lagomarsino Visitor Center in Ventura Harbor, or at two visitor contact stations on the islands. The various areas of the park are only accessible by boat and on foot, which keeps it one of the least visited National Parks in the country. Like the Galapagos Islands, the isolation of the Channel Islands has protected the fragile ecosystem and preserved species that can be seen no where else on earth. Its archaeological treasures include some of oldest human remains found in North America and record 10,000 years of human occupation. When you have your land legs back, make the short drive to Ojai for a night at the luxurious Ojai Valley Inn & Spa, set in exquisite surroundings.

A scenic route through the Los Padres National Forest takes you to the fascinating and unusual Carrizo Plain National Monument today, en route back to the coast. A glistening salt lake, vast grasslands that are home to diverse flora and fauna, and the mountains that surround are traversed by San Andreas Fault, whose tremendous effect is seen here as in ridges and ravines. The scenic drive continues to Santa Maria, in the foothills of Santa Barbara wine country, before heading up the coast to Pismo Beach. When you arrive in Pismo Beach, you'll find this classic California beach town has it all, from gorgeous surf and sunsets to fabulous galleries and wineries.

As you travel north on the Pacific Coast Highway today, plan to spend plenty of time visiting the spectacular Hearst Castle, officially the San Simeon National Historic State Park. Perched atop "La Cuesta Encantada," The Enchanted Hill, the 165-room "camp" that William Randolph Hearst built overlooks the majestic Pacific coast. Take the Experience Tour, which includes portions of the main house, the 18-room guesthouse, both swimming pools, and the esplanade and gardens.

Continuing on towards Monterey, you'll encounter several California State Parks, including Julia Pfeiffer State Park, the Andrew Molera State Park and the Point Sur State Historic Park, as well as wonderful beaches. When you reach Monterey, you'll be captivated by its legendary charm and beauty. Popular Monterey attractions include Cannery Row, the Monterey Bay Aquarium, Monterey Bay National Marine Sanctuary, Old Monterey, and Old Fisherman's Wharf. Be sure to sample the seafood chowder in a sourdough bread bowl! The National John Steinbeck Center is in nearby Salinas.

As you travel inland from the coast today, you have the opportunity to view the spectacular remains of an ancient volcano at Pinnacles National Monument. Millions of years of geologic action have created massive monoliths, spires, sheer-walled canyons and talus passages that are sure to render you speechless. Bear Gulch Cave is home to a colony of Townsend's big-eared bats, a "sensitive species" that hibernates here in the winter and raises their young in the spring. The monument also is a release site for endangered California condors, which you might catch sight of while hiking one the park's 30 scenic trails. In Fresno, you'll experience a region where agriculture still reigns supreme, where farmers markets, fruit stands and vineyards are commonplace and scenic drives introduce you to flowering orchards, citrus groves, vineyards and historical sites.

A short loop between Fresno and Visalia takes you through Sequoia/Kings Canyon National Parks, a complete contrast to the Southern California desert. The General Sherman Tree, the largest tree on Earth, grows in the Giant Forest, home to five of the ten largest trees in the world. The lower elevations around Ash Mountain contain the only National Park Service protected California Foothills ecosystem, consisting of blue oak woodlands, foothills chaparral, grasslands, yucca plants, and steep, mild river valleys. The foothills region is also home to abundant wildlife including bobcats, fox, rattlesnakes and mule deer, and much more rarely, mountain lions. In higher elevations in the Park, winter snowfalls determine which plants survive. The mighty Sequoia trees, the most massive living trees on earth thrive here. Between the trees, spring and summer snowmelts fan out to form lush, though delicate, meadows.

Today is a day of contrasts, as you travel through the Sierra Nevada Mountains to Death Valley National Park, the lowest, driest, hottest point in the country. Although the landscape is barren and forbidding in much of the park, snow-capped mountains rise to 11,000 feet, beautiful sand dunes glisten in the sun, and more than 1,000 species of plants make Death Valley home. At night and at higher elevations, a multitude of animals emerge and thrive. Explore Badwater Basin and Devil's Golf Course, and take the Artist's Drive, a 9-mile loop with lovely views. The Borax Museum tells the story of the famous product that was hauled out of the desert to California markets. Don't miss Scotty's Castle, a fantasy house that "Death Valley Scotty" told everyone he built. A guided tour tells the real story.

Who turned on the lights?! Welcome to Las Vegas, a city created to provide non-stop entertainment. Enjoy two days in this fantastic city, wandering The Strip, enjoying show after show, taking in the view from the Eiffel Tower or catching an adrenaline rush on the Stratosphere. For a break from the action, tour the world-famous Hoover Dam, or go for a hike or scenic drive through Red Rock Canyon National Conservation Area. Museum lovers will enjoy the Imperial Auto Museum, the Bellagio Gallery of Fine Art, and the Liberace Museum. Whatever you choose to do, remember that "what happens in Vegas stays in Vegas!"

It's a short drive to Nipton in the Mojave National Preserve, so you can explore a bit more of Las Vegas before heading back into California today. An historic nineteenth century western mining and ranching town, Nipton serves as a welcoming gateway to the Mojave Desert. The adobe Hotel Nipton was built in the Spanish Territorial style in the early 1900s; a wrap-around covered porch provides a relaxing place for guests to sit and gaze out at the desert and the night sky. During the day, take advantage of the great hiking, rock climbing, land sailing, and boating within the Preserve. You can pick up guidebooks, maps, drinking water and supplies for desert travel, as well as Native American crafts and gifts at The Nipton Trading Post.

Stock up on drinking water at the Trading Post in Nipton in preparation for today's journey all the way through the Mojave National Preserve. As you travel past cinder cones, lava flows, Joshua trees, Granite Mountains, and the "singing" Kelso Dunes, the Preserve's spectacular scenery may seem surreal. Stranger still are the ghost towns of Kelso and Amboy, left behind as the world moved on at a faster pace. Stop at the historic Kelso Depot Visitor Center, and at the Cima Store for a cold drink. After a day in the desert, Palm Springs will feel like a true oasis. Take the Palm Springs Aerial Tramway to the top of the mountain for a fantastic view over the city; you can even do their "Ride and Dine" package that includes a high-altitude dinner. There are many miles of hiking trails, including a one-mile nature walk through picturesque Long Valley, located just behind the Tram's Mountain Station.

Nearby Joshua Tree National Park is a must-see. Exploring its unique high and low desert landscapes and historic sites will give you insight into the ingenuity it took early ranchers to survive and prosper in this unique environment. The park is actually the combination of two large deserts. Below 3,000 feet, the Colorado Desert in the eastern half of the Park is dominated by the abundant creosote bush. The higher, slightly cooler, and wetter Mojave Desert is the special habitat of the undisciplined Joshua Tree. The land forms were and still are shaped by strong winds, sudden torrents of rain, and climatic extremes. Rainfall is sparse and unpredictable, streambeds are usually dry, and waterholes few. Plan to tour Keys Ranch, which is representative of the cattle ranches that once dominated this desert area. We also recommend you visit the Cottonwood Visitor Center for a different perspective on the park and its landscape. One of the park's best kept secrets, Cottonwood Spring Oasis is named for a natural spring that resulted from earthquake activity. The spring was used for centuries by the local Cahuilla Indians, who left artifacts in the area that include bedrock mortars and clay pots.

As you head back to Los Angeles today, you'll be driving the very scenic Route 74. A detour on the Palms to Pines Scenic Byway provides spectacular views of the full spectrum of Southern California ecosystems, from craggy mountains to clusters of desert palms, conifer forests, snow-capped mountains and urban valleys.

Continuing west to the coast, you'll instantly see why Dana Point's motto is "Harboring the Good Life." Thousands of boats bob on the waves at the pier, while miles of coastal bluffs and rolling hills overlook the ocean. The last leg of your journey is a classic coastal drive through Laguna Beach, Newport Beach and Long Beach before returning to the bright lights of Los Angeles. As you leave for home, know that you've experienced the trip of a lifetime in the National Parks, Preserves and Monuments of Southern California.

Daily departures throughout the year.