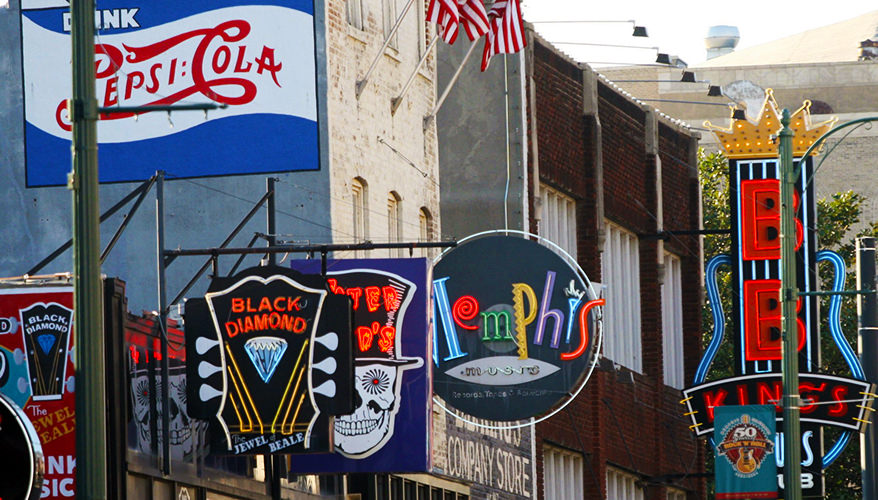 The rich cultural heritage of the Deep South is the focus for this wonderful tour. Discover the Civil War and Civil Rights history as well as America’s musical heritage as we take in the birthplaces of jazz, blues, country and rock’n’roll, the home of Elvis Presley and the music capitals of Nashville, Memphis and New Orleans. We also include a jazz cruise on the Mississippi and a visit to one of the grand mansions so redolent of Gone with the Wind - truly a medley of the sublime sights and sounds that so define this charming region.

Take your direct flight to Atlanta. On arrival, transfer to your hotel.

This morning we take a tour of the city forever associated with Gone With The Wind. It includes sites which were important to Martin Luther King Jr and a visit to the national memorial dedicated to the leader of the American civil rights movement. We journey to Chattanooga and check into our hotel.

Railway enthusiasts still flock to this town, which has the largest old-time steam railroad in the south. Today we board an equally exciting means of transport - The Incline Railway - which runs steeply up Lookout Mountain and affords wonderful views of terrain fought over during the American Civil War. The rest of the day is free for you to make your own discoveries.

This morning we travel to the small town of Lynchburg to tour the Jack Daniel’s Distillery where every bottle of the famous sippin’ whiskey has been produced since 1866. Interestingly, no liquor can be bought from this famous location due to a law held over from the prohibition era. Later we travel to the ‘Queen of Tennessee Plantations’, Belle Meade, located on the outskirts of Nashville, where our tour centres around the 1853 Greek Revival mansion. After our tour we transfer to our hotel.

Nashville is a city of contrasts, famous as the country music capital of the world and also called the ‘Athens of the South’ having, as it does, the only full-scale replica of the Greek Parthenon. Our morning tour introduces you to the facets of the city including the Parthenon replica and the Country Music Hall of Fame. You may wish to take an optional excursion to the mecca of Country and Western Music, The Grand Ole Opry, which is America’s longest-running scheduled show having never missed a Saturday performance since it was first broadcast on radio in 1925. This excursion is bookable prior to departure (subject to availability).

Today we travel south to Tupelo and the Elvis Presley Birthplace Museum. Here we have time to explore the humble two-roomed shack where Elvis lived in his early years and the small museum. Later we continue to Memphis, home of Elvis Presley and W.C. Handy who, after publishing ‘Memphis Blues’ in 1912 followed by ‘St Louis Blues’ and ‘Beale St Blues’, became known as the ‘Father of the Blues’. On arrival, after a brief orientation tour, we check into our hotel.

This morning we experience a true highlight of the holiday as we visit legendary Graceland, home of Elvis Presley. Explore the mansion and grounds of his estate on a well-presented audio walking tour which has an emotional conclusion at his final resting place. Your ticket also includes the Elvis Presley Automobile Museum. You are free in Memphis for the remainder of the day and you may wish to take afternoon tea at the famous Peabody Hotel and watch the famous daily parade of ducks at the lobby fountain.

The pace slows slightly as we follow Ol'Man River to Natchez, where historic antebellum homes and quintessentially Southern moss-covered treea offer old-fashioned small town charm. A one-time central port for the cotton trade in the early 18th century, Natchez is home to myriad grand old mansions and estates - an indication of the sumptuous scale of society life. We'll visit the Frogmore Cotton Plantation, which really highlights the contrast of working as a planter or slave in the early 1700s.

After visiting the palatial Greek Revival residence, Stanton Hall, we cross into Louisiana towards New Orleans - taking a shortcut over the spectacular Lake Pontchartrain Causeway, one of the world's longest overwater bridges. The afternoon in New Orleans is completely yours. Eating, drinking and taking in the famous New Orleans fun atmosphere with it's real emphasis on the best things in life. As the hometown of Jazz, it's an absolute highlight to your tour.

Breakfast time in New Orleans means coffee and beignets, sugar-dusted square yummy doughnuts.Perhaps start your two free days in this party town by exploring the French Quarter, where the colourful mix of culture and lively bohemian atmosphere is too easy to fall in love with. This evening, you'll have the option to cruise, dine and enjoy a live jazz band aboard The Natchez Steamboat, as it bobs along the Mississippi River.

Today is another day at leisure for you to explore all New Orleans has to offer. As the birthplace of jazz, many musical legends call it home; and with its colourful mix of culture and lively bohemian atmosphere you cannot fail to fall in love with it.

We wave goodbye to new Orleans early this morning as we set off for Montgomery. We stop along the way for a mooch around Monroeville town and its old courthouse, made famous by the film of Harper Lee's 'to Kill a Mockingbird.' In Montgomery, your evening is free to spend as you please.

Our tour takes you on a journey through Montgomery's rich history, focusing on the 1960's American Civil Right's Movement and pausing at the restored parsonage that once served as the home of Martin Luther King Jr. We'll also visit Hank Williams Museum before transferring you to Atlanta for your overnight flight home.

Please call us on (01892) 779900 or email This email address is being protected from spambots. You need JavaScript enabled to view it. stating your travel dates & competitively priced quotation.